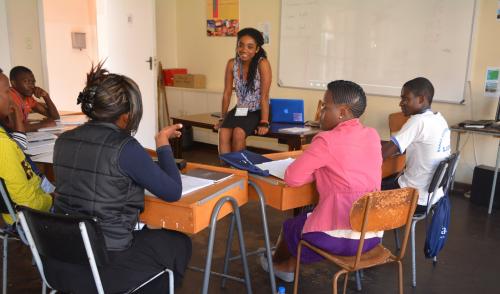 When Yale President Peter Salovey announced the Yale Africa Initiative in 2013, he inspired several Yale students from the continent to work toward achieving his goal of “bringing Africa to Yale and Yale to Africa.”

The students wanted to find a way to expose students in Africa to the experience of studying at a university like Yale before they apply to college, as well as advice on submitting a strong application. They consulted Ian Shapiro, Sterling Professor of Political Science and director of the The Whitney and Betty MacMillan Center for International and Area Studies, who embraced the idea.

With funds contributed by the MacMillan Center, Yaa Oparebea Ampofo ’16 B.A. and several other African students designed and piloted Yale Young African Scholars (YYAS), a week-long program designed to introduce high school students to the concept of a liberal arts education in the United States and to the process of applying for admission and financial aid.

“Often African students on the continent struggle with the process of applying to universities abroad,” said Ampofo. “They lack information about how to complete the forms, about what requirements they have to meet, and especially about financial aid options. We wanted our peers back home to know what incredible opportunities are out here for them, and we wanted to share our advice as students who’d gone through the U.S. university application process successfully.”

Inaugural sessions in Ghana and Ethiopia

To gain visibility and get the program up and running, the YYAS team developed an application form, which the Yale students distributed through their networks back home. In their first year they received more than 1,200 applications from 15 countries. They selected 100 participants and ran the first YYAS sessions in Ghana and Ethiopia during July and August 2014.

In seminars and discusion groups, the Yalies offered an introduction to university academics and provided training for taking the SAT (the standardized test is often foreign and challenging to international students). Also, the Yale students shared their personal experiences and offered encouragement to the participants. 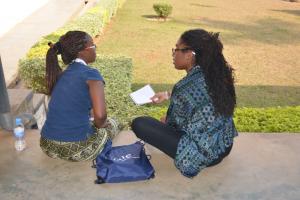 “We wanted the students to benefit from what we’d learned, and see that we’d made it through the process so they could believe in themselves and their own chances,” Ampofo said.

Recognizing the success of the pilot program, and keen to see it continue to help raise awareness about Yale across the continent, the university made the YYAS an official session part of the YYGS department. Again with support from the MacMillan Center, YYAS ran another two sessions for 100 students in Rwanda and Zimbabwe during summer 2015.

“What YYAS immediately underscored for us is the huge number of high-potential, and highly qualified students to be found across the continent,” Schutte Wadzinski said. “We were thrilled to see that YYAS could help us reach more of them.”

“We were absolutely thrilled with how well the pilot program went,” Ampofo said. “Not only were participants excited about at the information they gained, but a great many of supportive lifelong relations and friendships were formed as well. We knew, upon conclusion of the pilot that we were onto something — something truly transformative.”

It was then that the Office of International Affairs connected with Strive and Tsitsi Masiyiwa, philanthropists from Zimbabwe who were eager to support YYAS. Through their Higherlife Foundation the Masiyiwas provided a gift that would fund an additional three years of YYAS programming and help it expand to reach 300 students per year.

Today YYAS is one of the flagship programs of the Yale Africa Initiative and aims to make higher education more accessible to Africa’s most talented student leaders. This past July and August, YYAS brought together a total of 300 secondary school students in Ghana, Rwanda, and Zimbabwe.

Now entering the final year of the funding from the Masiyiwas, YYAS has become an intensive academic and enrichment program for African secondary school students who plan to pursue a university education and make meaningful impact as young leaders on the continent.

This year, YYAS will offer two programs for 150 students each in Kigali, Rwanda, and Tema, Ghana. On average, students come from more than 30 African nations and more than 200 different schools. Twenty Yale undergraduate and graduate students, most of whom hail from the continent themselves, will serve as instructors and mentors to the participants.

Participants will attend lectures by prominent Yale faculty and local experts as well as seminars developed and taught by Yale graduate and undergraduate students. Participants also engage in several experiential activities focusing on leadership and teambuilding and have a chance to interact directly with admissions officers from North American, African, and European universities.

Following the program, students will be paired with mentors from local organizations and U.S. university students who will help advise them throughout the university application process. YYAS offers daily workshops on different components of a university application, such as the ins and outs of the Common Application and how to craft a personal essay. By the end of the program, students have a plan and timeline for submitting their applications, as well as abundant resources for further research and mentorship. In addition, students receive both individual and group lessons for standardized tests, designed specifically for African test-takers. 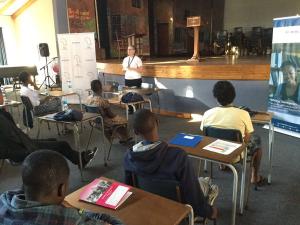 Participation in the program is free, making it accessible to students of all financial backgrounds. In addition, YYAS offers a limited number of travel grants for admitted students from low-income backgrounds who demonstrate the need for financial assistance to offset the costs of airfare between African countries.

YYAS is made possible thanks to the support of the Higherlife Foundation as well as by contributions from The Whitney and Betty MacMillan Center for International and Area Studiesat Yale.

YYAS benefits from support from three Local Partner Organizations who help administer the sessions alongside Yale’s staff and student teams. Ahaspora, located in Ghana, Imbuto Foundation in Rwanda, and Education Matters in Zimbabwe each offer local expertise plus ongoing mentorship for YYAS alumni from these countries. In addition, these local partners host Educators’ Conferences during YYAS. These conferences bring together 30-50 teachers, advisers, and headmasters from secondary schools in their regions for a two-day training program on how to support African students applying to university abroad. Such conferences expand the YYAS impact considerably, since the educators return to their communities equipped to assist many students with their university and financial aid applications.

For more information, send email to african.scholars@yale.edu or visit YYAS online. You can also watch a video taken during recent YYAS sessions in September 2017. Follow YYAS on Twitter and Facebook to stay up to date on program news and announcements.